The details of all the private lands still retained by the occupying SL military have been gathered and kept up-to-date by the Divisional Secretariats and the District Secretariats for years. However, SL Governor to North, Suren Raghavan, has recently issued a new form instructing the people who wish to reclaim their lands to file details along with the copy of the land deed directly to his secretariat. The latest move could be nothing else than a pure deception as witnessed forty-five days ago in Keerimalai (J/226) GS area, says Shageevan Shangmugalingam, the chairman of Valikaamam North Resettlement Committee. The landowners in Keerimalai were asked to allow surveying of their lands to reclaim the plots. But, the SL military was using the opportunity to seize the properties not claimed within the timeframe. Only 69 acres (1,100 Parappu) were counted as claimed by the owners, he said.

The move was dubbed as ‘accelerated scheme of identifying and releasing lands being used by the three forces’ on the request of SL President Maithiripala Sirisena.

The move has also come at a time when the SL State seeking for new ways permanently seize 2,000 acres of lands surrounding Palaali military base in Valikaamam North, commented Mr Shageevan. He is also an elected member of the Divisional Council of Valikaamam North. 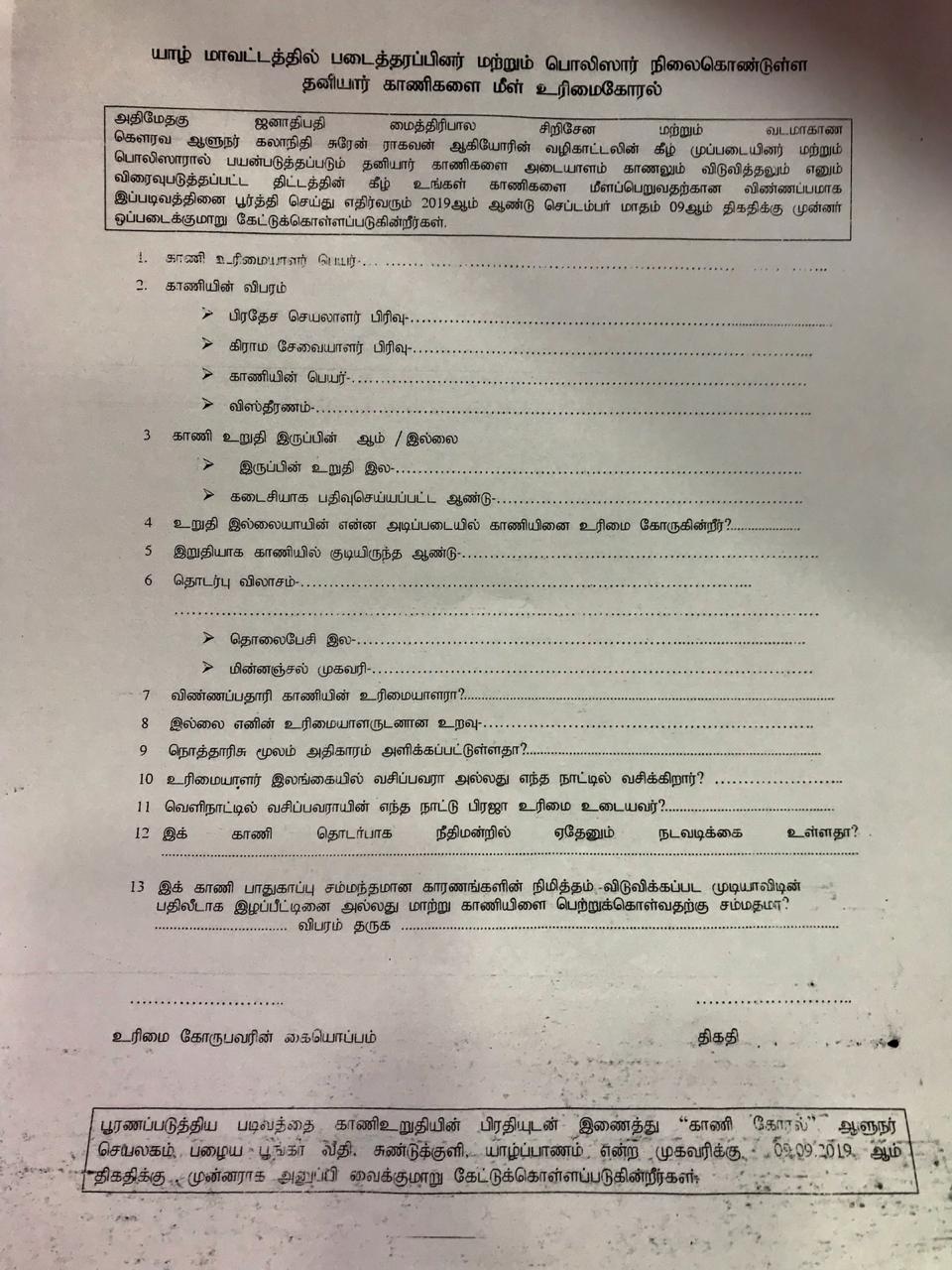 The one-page form contains 13 fill-in items, and the 13th question exposes the intention of the ‘accelerated’ deception, Shageevan says.

The SL Governor’s form seeks information on whether the claimant is residing on the island or outside. If living outside, the form asks the citizenship to be specified.

The 13th question specifically asks whether the claimant is willing to accept substitute lands elsewhere.

In July, the SL Governor told 71-year-old Maheswary Thambirajah that the properties which she had transferred to her daughters were unlikely to be released back to the rightful owners as they were staying outside the island.

The SL Army had seized her lands in 2012 to relocate its main base of 52 Division at Mirusuvil in Thenmaraadchi.

Earlier, in May, the mother was humiliated by a judge in the Court of Appeal.

The controversial judgement also said: “When it comes to National Security, Section 2 Notice may not even state the public purpose”.

The Sinhala judge also stated that matters in relation to National Security “need not and should not be discussed and probed openly”.